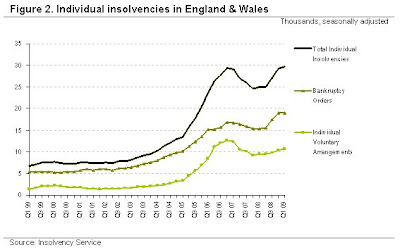 There can only be one blog entry today! BBC Radio 4 even had the subject as the second headline at 10.00am this morning! The subject is of course the latest bankruptcy figures. These have now been released by the Insolvency Service (IS). The story is being reported widely (e.g.(BBC, The Guardian). The figures paint a stark picture. The IS note, "There were 29,774 individual insolvencies in England and Wales in the first quarter of 2009 on a seasonally adjusted basis. This was an increase of 1.6% on the previous quarter and an increase of 19.0% on the same period a year ago." R3's new president, Mr Peter Sargent, has responded. The R3 press statement notes:

"Record numbers of personal insolvencies points to a grim year ahead

Today’s announcement of 29,774 personal insolvencies (comprising 19,062 bankruptcies and 10,713 Individual Voluntary Arrangements) is a shock rise of 19% on the same quarter a year ago. A survey of the UK’s insolvency practitioners, expects a dramatic increase of 31% in personal insolvency by the end of 2009 compared with 2008. The survey, carried out for R3, by polling company ComRes gave a prediction of around 139,000 personal insolvencies for whole 2009 in England and Wales.

R3 President Peter Sargent comments: “Today’s figures show the start of major rises
in personal insolvency, which insolvency practitioners, those on the front line,
believe will rise quarter on quarter this year. We know personal debtors usually
take up to six months to seek a statutory debt solution and by the end of 2009
the figures will reflect this lag.

We see cases of people seeking non-statutory debt solutions (such as a Debt Management Plan) or simply hanging-on, neither of which is a viable solution and this is reflected in today’s figures. The small increase in IVAs of only 11% is counterintuitive to rises in bankruptcy and perhaps indicates debtors’ affairs are in such a poor state they’ve gone straight to bankruptcy.”

The R3 survey also revealed that over 33% of insolvency practitioners have seen an increase in
personal fraud and a similar rise in corporate fraud.*

“Personal and corporate fraud is always there, but pressure is driving more people to consider it but now they are more likely to get caught. The scrutiny of cost-cutting exercises or an actual insolvency will reveal the crime. Companies try over invoicing, and people avoid paying taxes naively thinking they won’t get caught. Then often when bankruptcy nears, individuals try and transfer assets to keep those assets out of the insolvency. Corporate and personal fraud spiral in desperate times...”

Figures have also been released on the corporate side.
Picture Credit: Insolvency Service, 2009.