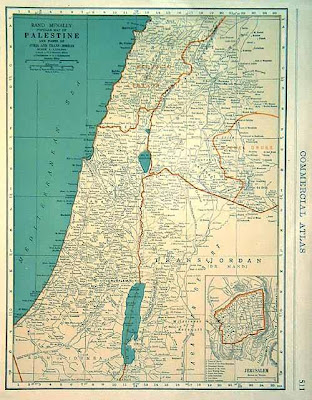 Professor David Graham QC notes:  "During a recent visit to Jerusalem I decided to see how insolvency law was dealt with in Palestine whilst the country was ruled under the British Mandate. This period lasted from the end of the First World War until 1948.
The authorities, working for the High Commissioner, soon determined to replace Turkish commercial law with English models. In this respect the legislative process was conducted by means of Ordinances of which there appear to have been a considerable number. At an early stage Ordinances dealt, for example, with usurious transactions, the introduction of a banking system and, in particular, the adoption of an entirely new Companies Code based on English statutes.
On several occasions, but more particularly on the 31st October 1931, an Ordinances were promulgated concerning imprisonment for debt. The situation then in England was largely governed by s.5 of the Debtors Act 1869, the practice in the County Courts being in the first place to make a suspended committal order against a recalcitrant debtor. By the early 1970s there were still a considerable number of debtors in prison and the situation by the Payne Committee, leading to the abolition of the Victorian legislation save in matters relating to Crown debts.
The Palestinian Ordinance was clearly produced by an extremely accomplished draftsman. It sets out in considerable detail the procedure to be adopted in such cases with a scheme that is tantamount to a mini-insolvency code. The jurisdiction to commit defaulting judgment debtors was conferred, appropriately enough, upon "the Chief Execution Officer."
In the course of my research I unearthed a volume entitled: "The Law Reports of Palestine" prepared in about 1933. This work contains several decisions relating to bankruptcy but the most interesting, for the moment, is that of Bank Wiasku Stolekzabobkowych v. Jacob Adler. Any student who in the examination who can spell the name of the appellant bank correctly deserves to be given extra marks!
The case came before three judges sitting as a Court of Appeal in the Supreme Court of Palestine. The Adlers, the respondents, had been made bankrupt in Poland. A judgment had been obtained against them by the bank on 4th November 1929 in the District Court of Jaffa for the sum of Pounds 6,976.63.
Under provisions within article 147 of the Commercial Code dating from about 1911 in Turkish times, the bank attempted unsuccessfully to make the Adlers bankrupt in Palestine. The jurisdiction to do so depended on whether or not they had an office in Palestine or, at any rate, had carried on business there. In the event neither condition was met.
The opportunity is likely to arise for me to carry out further excavations into bankruptcy law during the mandate period when I return to Jerusalem for the autumn season. The research so far is quite fascinating with much promising material likely to be unearthed in the future."
Picture Credit: http://www.rare-maps.com/maps_pic/RAND-1930-PALESTINE.jpg. Site of the excavations.