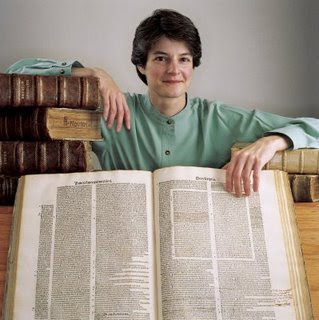 I am absolutely delighted to announce that Professor Emily Kadens, of the University of Texas Law School, will be contributing to this blog over the next six months or so. This is a great boon for the site as Professor Kadens (pictured right) is, in my view, America's leading scholar on the history of English insolvency law. Professor Kadens is uniquely equipped to deal with many of the thorny issues arising from the study of the history of our subject. Here is a brief biography of Professor Kadens, which is drawn from the press release following her appointment to a chair at Texas, in 2005:
"Emily Kadens... is a specialist in European legal and commercial history, studying specifically how commercial practices among merchants became binding custom, and how those customs, centuries later, were codified into commercial codes.

Professor Kadens comes to Texas after completing a clerkship with Chief Judge Danny Boggs of the U.S. Court of Appeals for the Sixth Circuit. She holds a law degree from the University of Chicago Law School where she graduated with honors in 2004. Prior to law school, Kadens did a post-doctoral fellowship at the American Bar Foundation where she studied attitudes toward law and lawyers in the medieval and early modern periods.

Kadens received both a Ph.D. and an M.A. in history from Princeton University. Her doctoral research focused on the switch from writing legal and administrative documents in Latin to writing them in the local spoken languages, concentrating on the mechanics of the switch in 13th-century Flanders. The research was conducted in Belgium, and sponsored by numerous grants, including a Fulbright Scholarship and a Rotary Foundation Ambassadorial Scholarship. Her dissertation, The Vernacular in a Latin World: Changing the Language of Record in Thirteenth-Century Flanders, has been accepted for publication in the monograph series Mediaevalia Lovaniensia.

Professor Kadens also holds a diploma in medieval studies (with highest distinction) from Université Catholique de Louvain in Belgium, and received both an M.A. and a B.A. (with college honors and Phi Beta Kappa) in humanities from the University of Chicago.

Her representative publications include Order Within Law, Variety Within Custom: The Character of the Medieval Merchant Law, 5 Chicago Journal of International Law 39 (Summer 2004); Can dictamen help date the documentary language switch? The case of the 13th-century Franc of Bruges 121, in Tock, B-M., ed., In principio erat verbum (Brepols 2004); several articles in both Dutch and English on medieval and legal history; and President Polk on Internal Improvements, 8 Green Bag 75 (2004) (with David Currie).

She has also taught the undergraduate courses “Prosecuting Crime: From Torture to Due Process” and “The Foundations of the Western Legal Tradition, 500-1500” at the University of Chicago."

Professor Kadens has given a number of public lectures on the history of the subject:

Her current work in progress focuses on two fascinating areas for consideration:

In my own short treatment of bankruptcy and the death penalty I neglected to cite Professor Kadens' recent work on the subject which she has now uploaded onto SSRN. I can now go someway to redress this oversight! Professor Kadens' treatment is invaluable to anybody looking into the history of our subject. This is an excellent development, and I am looking forward to Professor Kadens' posts over the coming months.