News Item in The London News on the Bankruptcy Registry in the Royal Courts of Justice - a naughty picture? 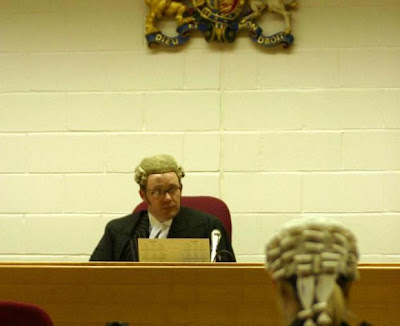 Today's The London Paper is carrying a story on page 8 on the Bankruptcy Registry of the Royal Courts of Justice. A similar piece appeared in The Guardian last December. The London Paper piece is noteworthy for the first hand comment of various court users but also because of the photograph that goes with the online version of the story. The hardcopy version carries a different, perhaps less problematic, picture. If this is a picture of the Bankruptcy Court in action from today it may well be a first! That is to say the first picture of the Bankruptcy Court in action that exists. It is my current understanding that it is not appropriate to take a picture of a court of law in action in this manner. The picture on the right accompanies the digital version of the story in the newspaper's online edition. Was permission sort for this picture? Is it even Mr Registrar Simmonds in the picture? Could the journalist (Ms. Monica Porter - or her photographer, Mr. Allan Weller of The Times) who took the picture be in contempt of court? For that matter could I be for reproducing the same? Is it an accurate picture anyway? I think it must be an archive shot and it does not appear to be John Simmonds in the photograph. If it was taken yesterday the Registrar would be in the post Lord Chief Justice Phillips dressing-gown type robe. He is not so attired so we may have to conclude that the picture is not what it first appears.
We can put these matters to one side for now whilst my investigations into the relevant rules continue as regards taking pictures in this manner. We can now turn to the text of the article:

"It's standing room only in the small, wood-panelled courtroom at the Royal Courts of Justice on the Strand. Be-wigged barristers, sharply suited solicitors and a number of anxious-looking individuals are here for the weekly winding-up session during which stricken companies are officially put out of business... or granted a brief stay of execution, giving their owners a chance to salvage them.

Ruling over the proceedings is Mr Registrar Simmonds, whose word, literally, is law. He is firm and businesslike but not without touches of humour. Perhaps he realises that in this grim arena, where people’s hopes and ambitions are routinely demolished, you need the odd lighter moment. Since the economic crisis set in, the number of companies hitting the buffers has risen sharply.

There were 4,607 liquidations in England and Wales between October and December 2008 – a 52 per cent increase on the same period a year ago, according to the Government’s Insolvency Service.

In 90 minutes, Simmonds pronounces the fate of 200 small companies of all kinds. Many will be wound up in seconds, uncontested.

But in other cases, business owners (or their barristers) will plead for more time to raise money and pay creditors. Three such business owners spoke to thelondonpaper about their desperate plight and the circumstances which brought them to it.

‘I HAVEN’T HAD A GOOD NIGHT’S SLEEP FOR WEEKS’

How long going for: Six years.

What went wrong: The landlord of the warehouse formerly used by Lydia’s company is suing her for £25,000 in unpaid rent. She claims she owes just £1,800 because the rest is covered by her deposit, but the landlord says it has already been allocated to repairs.

Grievances: “I feel landlords in this country are allowed to get away with too much. We couldn’t agree over the deposit, so he goes straight to the court with a petition. As a result I have £20,000 to pay in lawyers’ fees.”

Impact on life: “I’ve been paying my employees’ wages from my private account, because I don’t want to lose them, but they don’t know about the situation – I worry they will find out and quit.”

The court’s ruling: Lydia is given 14 days to submit evidence supporting her claim that she should be repaid the deposit.

What next? “If the court rejects my evidence, my business will go into liquidation.”

‘BANKS TAKE THE BROLLY BACK WHEN IT RAINS’

Company: Kimblecrete Ltd, a provider of temporary B&B accommodation for the homeless, with four properties in Finsbury Park.

What went wrong: New government regulations required extensive work to be carried out on the company’s premises, during which time revenues took a dive. The bank refused to help, and the builder absconded with £80,000.

Grievances: “In sunny times banks give you an umbrella but when it rains they take the brolly back.”

Impact on life: “The bank has frozen our accounts and we’ve been surviving from week to week.”

The court’s ruling: Kimblecrete is given 28 days to produce a viable proposal for repaying creditors. If it can’t, its next appearance at the winding-up court could be terminal.

What next? Along with colleagues Julieanne Chambers and Patrick O’Sullivan, Robbie refuses to give up.

‘I CERTAINLY WON’T WANT TO START A BUSINESS AGAIN’

What went wrong: The company’s main client is disputing a bill of £250,000, which has put it so deep into debt that it can no longer operate .

Grievances: David, who runs the company with his father, says they tried to find a compromise. Now the Revells can’t pay their suppliers and are threatened with liquidation. “Our bank has said it’s unable to help due to the financial ¬climate,” says David. “It refused our request for a bigger overdraft facility. But I don’t blame the banks as much as the Government, which should be doing more to protect small companies. There’s nothing to stop larger companies withholding ¬payments to their dependent companies.”

Impact on life: David’s father, who invested much of his own money in the company, has suffered a nervous breakdown and been told he can’t work for six months. His condition won’t be improved by the hefty legal bill he will receive at the end of the legal proceedings.

The court’s ruling: The row over the disputed debt goes to an independent adjudicator and the Revells have 49 days to see whether their lawyers can get the client to pay.

What next? “I don’t know what I’ll do if the decision is to liquidate,” says David. “I won’t want to start a business again.”

Picture Credit: http://www.thelondonpaper.com/thelondonpaper/news/london/courts-close-almost-200-businesses-in-90-minutes?image=0 - Mr. Allan Weller of The Times - permission to use currently being sought.