Is Phil a wrongful trader pursuant to s.214 of the Insolvency Act 1986? 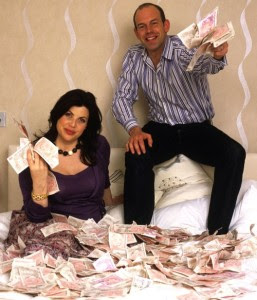 The London Lite newspaper has reported that "Phil's firm owed £500k." This begs the question, did the directors of the company (Garrington Home Finders Ltd) engage in, inter alia, wrongful trading pursuant to s.214 of the Insolvency Act 1986 (IA86)? The company is now in administration. The article goes on to note:

"Tv Property expert Phil Spencer's company owed more than £500,000 when it folded in February. Administrators' papers show Garrington Home Finders, which had clients including Keira Knightly and Kylie Minogue, owed creditors £575,052. Spencer, 39, had been paying staff out of his own pocket to keep it going."

Other newspapers have also picked up on the decline of Mr Spencer's company. The outstanding sum of £575,052 is, prima facie, a rather large figure for a company that qualified for the small company accounts exceptions. The creditors (and Professor Otto Kahn-Freund) might well ask: why was this sizable sum allowed to accrue by the directors? Mr Spencer is noted as being the managing director of the company.  S.214 IA 86 notes:

(1) Subject to subsection (3) below, if in the course of the winding up of a company it appears that subsection (2) of this section applies in relation to a person who is or has been a director of the company, the court, on the application of the liquidator, may declare that that person is to be liable to make such contribution (if any) to the company's assets as the court thinks proper.

(2) This subsection applies in relation to a person if—

(a) the company has gone into insolvent liquidation,

(b) at some time before the commencement of the winding up of the company, that person knew or ought to have concluded that there was no reasonable prospect that the company would avoid going into insolvent liquidation, and

(c) that person was a director of the company at that time;

but the court shall not make a declaration under this section in any case where the time mentioned in paragraph (b) above was before 28th April 1986.

(a) the general knowledge, skill and experience that may reasonably be expected of a person carrying out the same functions as are carried out by that director in relation to the company, and

(b) the general knowledge, skill and experience that that director has.

(5) The reference in subsection (4) to the functions carried out in relation to a company by a director of the company includes any functions which he does not carry out but which have been entrusted to him.

(6) For the purposes of this section a company goes into insolvent liquidation if it goes into liquidation at a time when its assets are insufficient for the payment of its debts and other liabilities and the expenses of the winding up.

(7) In this section “director” includes a shadow director.

(8) This section is without prejudice to section 213."

Perhaps Mr Spencer would be well advised to obtain and read a copy of Professor Andrew Keay's book on the subject of company directors' responsibilities towards creditors.
Picture Credit:http://www.houseladder.co.uk/Images/Live/NewsFeeds/News49.jpg. Whose money is that? Professor Kahn-Freund would not be amused.