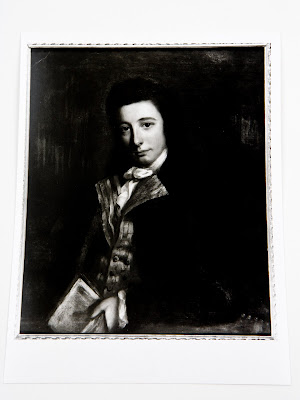 A story in yesterday's Financial Times (FT) regarding the liquidation of a subsidiary company of Alvarez & Marsal (A&M), a leading specialist in corporate turnaround and restructuring, put me in mind of various instances of insolvent insolvency specialists throughout history. To clarify and for the avoidance of confusion I am referring to insolvency experts who have themselves become insolvent or who have gone through an insolvency procedure. The liquidation of the A&M subsidiary should not automatically lead us to conclude that it was insolvent (see below). We can now turn to some actual insolvent insolvency experts!
The father of them all has to be Mr Basil Montagu QC (1750-1851), pictured on the right as a 'pensive youth.' Basil was an illegitimate son of the 4th Earl of Sandwich by his mistress Martha Ray. Basil can rightly be accounted as the father of modern insolvency law. He was a prolific author on the subject (and on many other areas) and he became the first Accountant General in Bankruptcy, following a long and successful career as an insolvency silk. He was the first incumbent of the post that Mr Stephen Speed now holds. I have written about Montagu at length elsewhere (in addition to the long article cited above e.g. one, two and three) so will not repeat myself here, save to say that following his successful career as an insolvency silk and Accountant General he died as an absconding debtor in the debtors' haven of Boulogne in 1851.
In more modern times there is the case of Shierson v. Vlieland-Boddy [2005] BPIR 1170, which involved an insolvent insolvency practitioner (IP). Other reported cases highlight IPs getting into hot water, but there is no indication that they were actually insolvent from the facts of the various decisions. In this respect see for example: Re A J Adams (Builders) Ltd [1991] B.C.C. 62 (the case is discussed in: Insolv. Int. 1991, 4(10), 75-76) and the activities of Mr John William Papi. In his judgment Warner, J summarised  the background to the case:

"... Mr Papi is a member of the Insolvency Practitioners Association, whose practising certificate and authorisation were suspended by an order of the disciplinary appeal committee of the association made on 5 July 1990. That was the culmination of disciplinary proceedings taken against Mr Papi. Those disciplinary proceedings resulted in certain charges of professional misconduct against Mr Papi being found proved. I need not go into the details of them. They may be summarised in this way. There were failures to comply with obligations to make returns and the like in various liquidations and receiverships; there were instances of Mr Papi having taken remuneration too early and one case of his having reported that he had asked directors of a company formally to make a statement of affairs when he had only asked them to do so orally. There were no findings of dishonesty on the part of Mr Papi. However, the result is that for the period of suspension, which is to be for six months, reducible to one month if Mr Papi complies with certain conditions, Mr Papi is debarred from acting as an insolvency practitioner."

Another IP lost his licence to practice in 1995 and fought for quite a long time before eventually being made bankrupt in around 2002. For a discussion of IPs discipline and complaints procedures see Professor Adrian Walters' recent work for the Insolvency Practices Council (IPC - one and two). Other professions are effected by bankruptcy. In a previous blog entry I have mentioned the effect of bankruptcy on trustees, i.e. they will be removed from that office. Barristers are, prima facie, not affected by insolvency proceedings it seems, whereas solicitors will have their practicing certificates automatically suspended following a bankruptcy adjudication.
In terms of insolvent IPs and associated bodies I was also once told about a cafe that resided in the Insolvency Service's Bloomsbury Street headquarters. Apparently the cafe had to close down due to liquidity issues. This story is as yet unverified. Any confirmation on this would be gratefully received! Finally, we can now revert to the FT story:

"Alvarez & Marsal, a leading specialist in corporate turnaround and restructuring, has started insolvency proceedings at one of its subsidiaries over a business dispute.
The world reknowned turnaround firm, which is managing the liquidation of Lehman Brothers, the biggest bankruptcy in history, has placed its subsidiary in Hong Kong into voluntary liquidation under accountancy firm KPMG.
The move is set to resolve a dispute over its acquisition of a corporate restructuring and insolvency practice in Hong Kong called On Target Advisory.
The turnaround firm said the unit was separate from the rest of A&M and would not impact the rest of the firm’s operations.
“This has been a two-year dispute with one individual, Nick Hill, who took very aggressive action over the business terms of a contractual agreement,” a spokesperson for A&M said in an e-mailed statement. “Filing for voluntary insolvency is a defensive measure on our part to end this dispute. This has no impact whatsoever on our ability to serve clients in Asia or anywhere else, and it has no impact on the rest of Alvarez & Marsal.”
Alvarez & Marsal was founded in1983 by Tony Alvarez II and Bryan Marsal. It has operations in North America, Europe, the Middle East, Asia and Latin America, “drawing on a proud operational heritage”, it said on its website. The firm has been expanding its turnaround and restructuring practice."