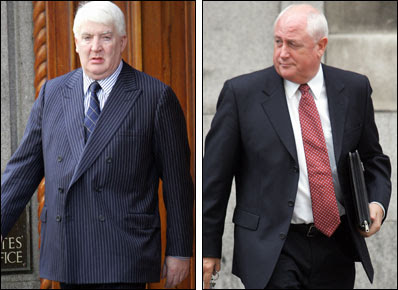 (2) The court, on the application of the liquidator may declare that any persons who were knowingly parties to the carrying on of the business in the manner above-mentioned are to be liable to make such contributions (if any) to the company's assets as the court thinks proper."

s.993 CA06 - Offence of fraudulent trading
(1) If any business of a company is carried on with intent to defraud creditors of the company or creditors of any other person, or for any fraudulent purpose, every person who is knowingly a party to the carrying on of the business in that manner commits an offence.
(2) This applies whether or not the company has been, or is in the course of being, wound up.
(3) A person guilty of an offence under this section is liable–
(a) on conviction on indictment, to imprisonment for a term not exceeding ten years or a fine (or both);
(b) on summary conviction–
(i) in England and Wales, to imprisonment for a term not exceeding twelve months or a fine not exceeding the statutory maximum (or both);
(ii) in Scotland or Northern Ireland, to imprisonment for a term not exceeding six months or a fine not exceeding the statutory maximum (or both).
Professor Keay's recent book provides excellent further reading on these provisions. The recent successful deployment of the fraudulent trading provisions came in a prosecution brought by the Serious Fraud Office (SFO) against the directors of Practical Property Portfolio Limited, a company that was placed into compulsory liquidation in Spring 2003 by the DTI (now BERR) on public interest grounds. The directors have also been disqualified from acting as directors for periods between 10 and 15 years. The background to the case is as follows:
"The Practical Property Portfolio (“PPP”) companies sold around 4,000 residential properties in the north of England to at least 1,750 investors in exchange for an estimated £80 million.. The shocking standard of some of the properties sold by the company was captured on a film which was made by one of the investors and shown at court. When she and her husband visited the property PPP had purchased on her behalf, using her pension savings, she discovered that her `investment' was a burnt out derelict shell of a house in a street of properties sold to other investors which had become so vandalised that nearby graffiti appeared to refer to the street as the 'Gazza [sic] strip'. The contrast this presented with the `show home' she had visited before parting with her savings could hardly have been greater. During the three day hearing this week, the court heard that the contempt these defendants showed for the investors was also illustrated by the company's practice of recycling substandard properties. If an investor was unhappy about the property purchased on their behalf, PPP often agreed to a `buy-back'. However, the company then frequently re-sold the same property to another unsuspecting investor. One property, first acquired in 1999, passed through the hands of four investors in the space of three year. The evidence strongly suggests it was never refurbished and was ultimately sold at a loss."

The SFO notes that the directors of PPP, the five defendants, were sentenced as follows:

In passing sentence HHJ Whitburn QC said of Potts that he had “looted” from the company, “spent blatantly” and that he “demonstrates profligacy on a heroic scale”.