Farewell Lord Hoffmann - was he the greatest company and insolvency judge of all time? 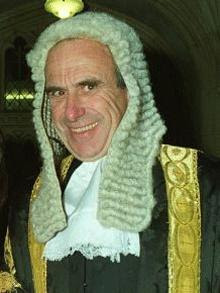 One of the greatest company law and insolvency law judges of the last 20 years or so retired last week. His name ("Baron Leonard Hubert Hoffmann of Chedworth, or Lennie to many") will always be linked with some of the most far reaching and important judgments in both subjects. For a critical evaluation of his contribution see:  McCormack, G. Lords Hoffmann and Millett and the shaping of credit and insolvency law (2005) L.M.C.L.Q. 2005, 4(Nov), 491-514. Here are some of the cases in which Lord Hoffmann (as he became) sat on the panel and in many cases gave the leading judgment/opinion:
Lord Hoffmann has now joined Brick Court Chambers as a mediator. Here is Mr Joshua Rosenberg's Law Society Gazette piece on the Lord Hoffmann:

"So, farewell then Lord Hoffmann. The much misspelled judge retired as a law lord this week to earn some real money as an international arbitrator and mediator. He will practise from Brick Court Chambers – whose joint head, Jonathan Hirst QC, proclaimed that Hoffmann’s ‘reputation as one of the leading jurists of the last 20 years is unquestioned’.

Really? Some of us certainly questioned Hoffmann’s reputation just a decade ago. Perhaps a quick reminder would be in order.

First, though, I should stress that I am not questioning his intellectual powers, which remain formidable, nor his knowledge of the law, which strikes me as masterly. Mention Hoffmann’s name to any commercial lawyer and you will be told of some visionary ruling of his that has been followed by lesser judges ever since.

Nor am I objecting to his willingness to speak his mind when other judges would have been more tactful. The obvious example is the so-called Belmarsh case, decided in December 2004, when the law lords were asked whether there was a ‘public emergency threatening the life of the nation’ sufficient to justify legislation under which foreign terrorist suspects had been detained indefinitely.

Hoffmann thought not. This is a perfectly respectable point of view – though one, I believe, that underestimates the long-term threat to Britain. But there was really no need for him to have added that ‘the real threat to the life of the nation... comes not from terrorism but from laws such as these’. That sentence, which dominated media reports of the ruling, undermined his fellow law lords by giving the impression that they had decided the case on political grounds.

And although it seems a bit late now to say that the European Court of Human Rights ‘lacks constitutional legitimacy’ – as Hoffmann did in a lecture to the Judicial Studies Board last month – I believe he was on stronger ground in suggesting that the European judges should be slow to interfere when a national court has properly taken account of a Strasbourg ruling.

But, if Hoffmann’s reputation really had been unquestioned, he should now be approaching his retirement age of 75 as senior law lord – the very pinnacle of the judicial hierarchy. Appointed to the Lords when he was only 60, he would have become presiding judge in our final court of appeal if ‘senior’ had still meant ‘longest-serving’.

That convention was abolished in 2000 when Lord Irvine, the Lord Chancellor, announced that Lord Bingham was to become senior law lord. It was a brilliant move: Bingham had never seemed entirely comfortable as Lord Chief Justice and went on to flourish in the House of Lords. But I suspect it would never have happened but for the Hoffmann debacle of 1998.

It was in November of that year that the law lords heard and decided the first of three appeals involving Augusto Pinochet. The former Chilean dictator was challenging attempts to extradite him to Spain, where he faced charges of torture and hostage-taking. Put simply, the House of Lords had to decide whether Pinochet had immunity from arrest and extradition. Earlier, the High Court had decided he did enjoy immunity for everything he had done as head of state. If the law lords were to reject an appeal by the Spanish prosecutor, Pinochet would return to Chile in triumph.

There was immense interest in the outcome, which turned out to be a cliff-hanger. Delivering their televised judgment, the law lords appeared evenly split until Hoffmann, the most junior, voted to allow the prosecutor’s appeal – agreeing with Lords Nicholls and Steyn that Pinochet did not have immunity from prosecution. Hoffmann gave no reasons of his own.

A few days later, it emerged that Hoffmann was a director and ‘chairperson’ of Amnesty International Charity Ltd, a body set up to support Amnesty International. Nothing wrong with that, of course – or the fact that his wife had been employed by the campaign group for some 20 years. But Amnesty was a party to the case. It had been given leave to intervene and address the law lords in support of the Spanish appeal.

The normal thing for a judge to do in such circumstances is to declare an interest and invite the parties to object or acquiesce. It has long been rumoured that Lord Slynn, who chaired the panel of five law lords, paused at the start of the hearing in the expectation that Hoffmann would do just that. He did not. Perhaps Hoffmann thought he might be removed from a case he must have wanted to hear. Perhaps he thought it might cause unnecessary delay. He has never said.

According to rumour, Slynn felt let down by Hoffmann. The ruling given by Slynn’s panel had to be ‘vacated’ – the only time this has ever happened – and the case was reheard by a fresh panel. But we may never know what happened unless an insider now feels free to tell us: Slynn died earlier this month.

Need I explain why the Slynn-Hoffmann ruling was set aside by an appeal committee of five other law lords? It must surely be obvious to any lawyer. As Lord Browne-Wilkinson said in the House of Lords on December 17, 1998, ‘in the special circumstances of this case, including the fact that Amnesty International was joined as an intervener and appeared by counsel before the appellate committee, Lord Hoffmann, who did not disclose his links with Amnesty International, was disqualified from sitting.'"