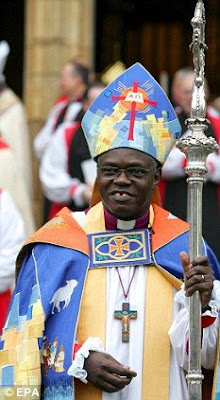 In a previous blog entry I have engaged in an application of Darwin's theory of natural selection and evolution to the insolvency laws. An article in one of today's broadsheets means creationism can also now be discussed in the blog (after a fashion). The Archbishop of York, Dr John Sentamu, has published elements of his Easter message in today's Daily Telegraph attacking, inter alia, the "blind greed" of banks. Also writing in the paper, Mr. Andrew Pierce, notes that Dr Sentamu, "has issued a vehement attack on financiers who ignored the need for proper regulation." If we revert to Dr Sentamu's text we can observe the general flavour of his approach. He observes, inter alia:

"I do not want to play down the fear induced by the worldwide recession. Millions more are going to be unemployed, retired people dependent on their savings will have to change their lifestyle, extra taxation is inevitable and we shall all have to tighten our belts... Did we really think that interest rates, house prices and mortgage offers would go on rising without limit, like a juggler optimistically adding more and more balls to his act with only the same two hands to catch them? As a society, our collective pursuit of making money reaped its reward and a collapse was unavoidable...The irony is that the idea of an unregulated market, in which all this could happen, was the brainchild of an 18th-century Christian. Although he knew individuals might be motivated by their greed, he believed an "unseen hand" would reshape their collective efforts to serve the common good. So the market would need no human regulation. So taught Professor Adam Smith; he was religious, and believed that all operators in the market would avoid the dangers because they understood them. But unfortunately, most of those operating in money markets abandoned any fear of risk...The dangers of seeking personal gain in a culture of bonuses should have been avoided, while opportunities for the common good should have been taken up. God's intervention in the system is not by underwriting avarice but by calling us to account."

In previous funded research (Personal Insolvency Project - PIP) commissioned by the Insolvency Service and Grant Thornton LLP and two spin off articles (one and two) I have addressed the 'credit environment' question at some length and in particular the balance between debtor and creditor responsibility. Dr Sentamu's comments touch on these issues and they will be the subject matter of this blog entry. It is certainly a vexed area! One has to be careful because excessive creditor bashing is quite problematic, especially when undertaken in a broad brush approach as seems to be the case with Dr Sentamu's Easter message. As Dr Johnson said, there are two sides to every credit bargain. Both must take a respective portion of responsibility for what amounts to a private contractual agreement.  Yes the creditor must take some responsibility, but so must the debtor. We might argue that it is unfair that all the blame and stigma falls on the debtor (as I have done in the past). Similarly, there must be a counter argument, namely, that to put all the blame on the creditor is also disproportionate and illogical. Dr Sentamu might bash the banks, but he must surely also bash the debtors. Perhaps he is in the quote cited above.

One should also be careful when selecting quotes and authority for support. In his Easter message Dr Sentamu relies on a number of learned commentators, including, President Thomas Jefferson in his attack on the banks. Dr Sentamu quotes the president and observes that the regulators should have taken heed of his advice. Jefferson notes:

"...banks are more dangerous than a standing army. They can destroy individuals, communities and nations."

Dr Sentamu goes on to note, "Regulators should have heeded that warning." This is very strong stuff indeed. We await the response of the British Bankers' Association (BBA) to this slight on their membership. Dr Sentamu should perhaps have been more careful with his use of President Jefferson's words however as the third US President also said: "Christianity is the most perverted system that ever shone on man." This was not an anomalous outburst. In relation to Christianity President Jefferson also said:

"To talk of immaterial existences is to talk of nothings. To say that the human soul, angels, god, are immaterial, is to say they are nothings, or that there is no god, no angels, no soul. I cannot reason otherwise...without plunging into the fathomless abyss of dreams and phantasms. I am satisfied, and sufficiently occupied with the things which are, without tormenting or troubling myself about those which may indeed be, but of which I have no evidence."

Jefferson also once observed: "A professorship of Theology should have no place in our institution." Perhaps individuals should be as cautious of pronouncements by theologians following the advice of President Jefferson as they should be cautious of banks. Whilst Jefferson may not have been a fan of banks - one must also conclude that he was also no friend of Christianity either, being an agnostic or more probably an atheist. An unusual weapon indeed in an Archbishop's armoury!
One might ask what qualifies Dr Sentamu to talk authoritatively on these issues. He is of course a learned theologian, but does that qualify him to discuss these complex financial issues in anything other than a broad brush, simplistic and religiously biased manner? Dr Sentamu's doctorate was not on matters of finance, banking, insolvency or any other related area. It was entitled: "Some aspects of soteriology, with particular reference to the thought of J.K. Mozley, from an African perspective." (University of Cambridge, Selwyn College, 1984). Soteriology is the branch of theology that deals with salvation. Dr Rowan Williams, the Archbishop of Canterbury, has also spoken on roughly analagous debt and credit issues when in April 2008 he was interviewed on BBC Radio Four's Today programme on "Credit, Debt and Inequality." Their respective flocks may take something from their pronouncements, but others may take a different view. Will the Chief Rabbi (Sir Jonathan Sacks) or any other theologian be making similar interjections in due course against the growing financial uncertainty? In the interim it will be interesting to see how Mr. Eric Leenders (individual responsible for insolvency policy issues) or Ms Angela Knight CBE (Chief Executive) at the BBA respond to Dr Sentamu's comments.
Picture Credit:http://i.dailymail.co.uk/i/pix/2008/06/05/article-1024246-039854010000044D-308_233x423.jpg