The Star of Zanzibar – a case for the Baker Street irregulars or Ernst & Young? 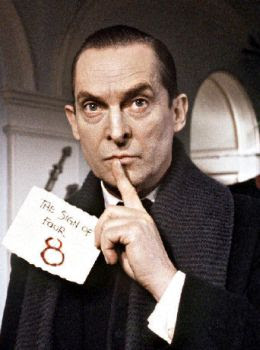 There has not been a more puzzling missing gem case since Mr Sherlock Holmes (pictured left) and Dr John Watson investigated the mysterious disappearance of the ‘Blue Carbuncle.’ But the administration of Wrekin Construction (noted in a previous blog entry) has thrown up a mystery that even the great Holmes could not get to the bottom of. That is probably untrue, he almost certainly could! The Sunday Telegraph is today reporting (in two stories - one and two) that the administrators of Wrekin Construction, Ernst & Young, are in search of a missing £11 million ruby purportedly owned by the firm. It is understood that they are, “trying to establish why the gem was bought or whether it exists at all.” Dear readers, it is not the 1 April. This is apparently a serious story! The missing ruby, said to be the most expensive on record is purportedly worth £11 million pounds. The administrators are investigating whether the gem was used to inflate the assets of the troubled building firm. The Sunday Telegraph reporter, Patrick Sawer, notes:

“Wrekin reported in its accounts for 2007 that it had bought the Star of Zanzibar from Tamar Group, one of its shareholders, for a ‘fair value’ of £11 million. It paid in interest bearing preference shares…The purchase transformed the appearance of Wrekin’s balance sheet, helping to turn an £8 million liability in March 2007 to net assets of £6 million by the end of that year.”

Creditors of Wrekin Construction could not of course obtain any beneficial realisation from a sale of the Star of Zanzibar as the preference shares had already been issued to the Tamar Group against the value of the ruby.

There are a couple of other noteworthy insolvency stories in this weekend’s press, in both Scotland on Sunday (regarding the upsurge in insolvency business north of the border) and the Independent (regarding the vexed issue of the 10 point penalty for football clubs passing into insolvency procedures, on which I have touched elsewhere), but neither top the mysterious case of the Star of Zanzibar. My sources at Lock & Co of St James’s Street have informed me that a number of deer stalkers have been ordered for the team at Ernst & Young. Lets hope Professor James Moriarty does not scupper their investigation! I am now off to light my churchwarden pipe and have instructed my wife not to disturb me whilst I ponder this two pipe problem.

Picture Credit: http://www.hindu.com/mp/2007/12/01/images/2007120150900401.jpg. Your faithful blogger submits that Jeremy Brett is without doubt the best Sherlock Holmes. This story raises the issue of an important future acquisition for the Muir Hunter Museum of Bankrupty at KU. If anyone knows of a large ruby going cheaply, please let me know!