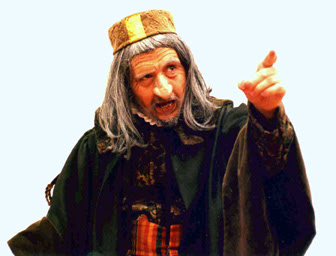 The recent announcement by Mr Gareth Thomas MP, the Minister for Consumer Affairs at BERR, regarding new measures to combat loan sharks makes very interesting reading. The announcement highlights a problem that has long blighted English insolvency law, namely, the lending of money at excessive rates of interest. In the history of our subject this phenomenon is more commonly known as usury, a practice famously examined by Shakespeare in his The Merchant of Venice. Who can forget the character of Shylock? (pictured left)

The new measures intend to tackle criminals who illegally lend money. A new confidential national telephone hotline has been set up which gives consumers one single point of contact. This telephone hotline is accompanied by a new website which provides information on managing finances and how to borrow money safely. The initiative has had some success to date:

“The Stop Loan Sharks teams have successfully prosecuted more than 60 people with a further 90 prosecutions underway. This amounts to nearly 40 years of custodial sentences for illegal lending and associated crimes.

The teams have supported more than 7,000 victims of illegal moneylenders. The first two pilot schemes were launched in September 2004 and then rolled out to every region of England, Wales and Scotland in 2007.

Their work has meant around £14million has been saved for consumers who were locked in illegal deals with these money lenders.”

In the historical context usury legislation has been around for over 774 years. The first noteworthy statute was enacted in 1235 and was entitled: Usury shall not run against any within Age.  The early medieval church had of course taught that all lending at interest was sinful. The church thought that moneylenders were idle and that there gains through lending were essentially sinful as the moneylenders did not actually do anything to earn the money on the loans they had made. There was no physical effort. This position of the church may however have been tempered by the church’s own desire to cause these moneylenders to contribute to the construction and maintenance of church property as a way of atoning for their sinful money lending ways. It is doubtful that this species of  Machiavellian intention is mirrored in the latest regulatory push in this area. The bankruptcy acts of the early modern period were usually closely accompanied by acts that regulated usury and there is a vast contemporary literature on the subject.  There is evidence of various groups in society engaging in this sort of activity over the ages, including lawyers in the seventeenth century. These scriveners engaged in money lending activity as part of their practice.

This new initiative is very heartily welcomed, but as with so many other areas in our subject one cannot help thinking, plus ça change…