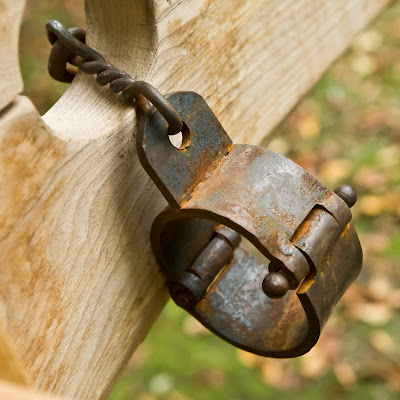 Imprisonment for debt and hanging were of course not the only treatments that were known to insolvents. Numerous other methods of punishment were used.

An Act for the better relief of the creditors against such as shall become bankrupts (1604) stipulated that if a bankrupt refused to provide information on examination by the Bankruptcy Commissioners as to the whereabouts of his possessions, once lawfully convicted he would be made to,

“stand upon the pillory in some publick place by the space of two hours, and have one of his ears nailed to the pillory and cut off.”

Being placed in the pillory often resulted in death for the unfortunate incumbent. The use of the pillory was abolished in 1837.

Whipping was used by the Bankruptcy Commissioners to obtain information from debtors who did not freely speak of the whereabouts of their property. In one early bankruptcy bill introduced by Sir Francis Crane a suggestion was made that some bankrupts should be whipped to death. Punishment could also include transportation for life and imprisonment with hard labour. Sir Edward Coke noted on the 24th March, 1621, that,

“theise men take up mony when theay intend to break…The Banckrupt to be whiptt to death, but I like not lawes written in bloud.”

From another source we are told that Sir Edward thought that, “they deserved it.” ‘They’ being bankrupts in this context. Whipping was not unusual during the period. We are told that it was the punishment that befell William Finch, Anthony Sherlock and William  Woodcock, who were convicted of petty larceny after stealing some horse tack and a ewe respectively.

One of the least callous treatments forced upon debtors was the wearing of conspicuous apparel or as Ford has observed, “distinguishing garb.” The garments ensured that debtors were singled out from ordinary individuals. This led to stigmatisation which one commentator has called a “happy expedient.” In Scotland, insolvents were forced to wear an outfit consisting of a yellow and brown bonnet and tights whilst sat in the public square between ten and twelve o’clock after adjudication of their bankruptcy. In France insolvents were forced to wear a green hat.

In Rotterdam and Leyden debtors were not forced to wear distinguishing garments, indeed the opposite was true. They were forced to undertake public penance in their “undermost garments.” The debtor would undertake this before the Town House for a proscribed period of days for one hour a day from half past eleven until half past twelve. In Spain insolvents were made to wear an iron collar “one finger thick.”

Satisfaction could also be made to the creditor through debtor servitude, this was certainly a feature of Roman insolvency law.