Barristers, Bankruptcy and the case of Serjeant Finch 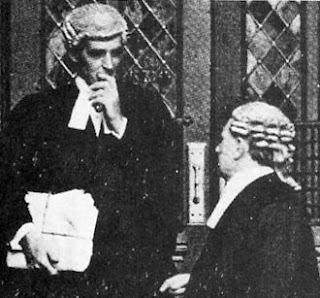 The Bar Standards Board has recently issued a guidance  statement for barristers explaining what they should do if they are subject to a bankruptcy order or individual voluntary arrangement. Pursuant to paragraph 905(c) of the Code of Conduct a barrister (whether in practice or not) should report promptly to the Bar Standards Board if:
"1. Bankruptcy proceedings or directors disqualification proceedings are initiated against him or her
2. A Bankruptcy order or directors disqualification order is made against him or her
3. He enters into an IVA with his or her creditors."
This statement raises an interesting issue which has a direct historical parallel. In 1620 a case came before Lord Chancellor Verulam, that involved Sir Henry Finch, a Serjeant-at-Law (Finch and others v. Hicks and others (1620) Tothill, 113). Sir Henry was not an advocate in the case, but the debtor. His sons, John and Nathaniel were sureties for their father’s debts and were liable with him pursuant to a number of bonds that secured the indebtedness. A commission was appointed to compound the debts following an enforcement action by Sir Henry’s creditors pursuant to the bonds. Sir Henry’s professional income had not been enough to placate his creditors, and Ritchie reports that as a consequence of the creditors actions the sons, “were abridged of their liberty.” The Finch family sought relief in Chancery. An injunction was granted by Frances, Lord Verulam, to the Finch brothers and Sir Henry that stayed the actions of the plaintiff creditors. For further details and details of other early composition cases see here.
Picture Credit: http://www.international-barrister.com/Bilder/Barristers.jpg