Bankruptcy and the Death Penalty 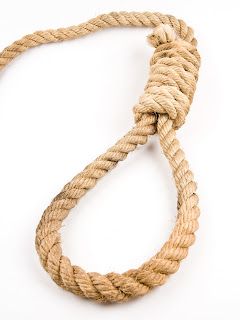 The last thing you want when you are on trial for your life is one of your own character witnesses saying that you are, “the greatest rogue in England.” This is what happened to Richard Towne in 1712, the second victim of a bankruptcy statute of 1705 that introduced capital punishment into English law. Severe treatment had come before. From 1604 a debtor could be placed in the pillory for non-disclosure of assets to the Commissioners in Bankruptcy. The debtor’s ear was then nailed to the pillory and cut-off. By the early eighteenth century this treatment was not deemed sufficiently effective, so the treatment was escalated to a pitch of “Gothic Barbarity” implementing the, “heaviest infliction of the law.” From 1705 a debtor could be hung for non-disclosure of his assets. The Old Bailey Session Papers, show that as many as six people may have met such an end.

John Restow was the first person to be tried for contravening the statute of 1705 in 1711. Restow was a Linen draper living in Whitechapel who was declared bankrupt. He attempted to defraud his creditors by moving his goods beyond their reach. He did this in the dead of night using carts to take both his personal and business effects to the riverbank. They were then loaded on to a cargo boat for transference to a sloop anchored at Lee, for onward transmission to an unknown destination, outside the reach of his creditors. Or so Restow thought, for his creditors pursued him and his goods to the sloop. He was imprisoned and found guilty by the jury. He was put to death.

Richard Towne, a tallow chandler, was the second person to be put to death. Towne fled to Holland with his books of account, goods and writings in an attempt to escape his creditors. He amassed a not inconsiderable sum which included eight hundred guineas. With this booty he boarded a lacquer boat for Holland. The money fell overboard during the voyage whilst Towne was vomiting. But Towne was hampered by his own constitution, sea-sickness and the weather conspiring to hamper his escape attempt. The boat put in to shore whereupon Towne was arrested and subsequently put to death.

William Montgomery was the third person to meet his end in this manner following a trial in 1752. Montgomery had claimed to be living in Rotterdam. He was instead resident in London for the duration of the time he had purportedly been in Rotterdam, “with intent to cheat and defraud his creditors.” Several witness testified to this effect, namely that he had been in London for the entire time, in some instances living, “within twenty yards” of one of his creditors. Montgomery was found guilty and sentenced to death.

In 1756 an embroiderer named Alexander Thompson of Bury Street, Westminster, came before the sessions. He had failed to surrender himself to be examined by his Commissioners in Bankruptcy at the Guildhall, “to make a full discovery and disclosure of his estate and effects, when and where the creditors are to come prepared to prove their debts.” His defence of being in the north of Scotland and therefore being unaware of the bankruptcy commission was not successful and he was sentenced to death.

John Perrott, a lacemaker of Ludgate Hill, was executed at Smithfield in November 1761 for concealing, embezzling and removing his effects. Submitted in evidence against Perrott was the following:

“I went pursuant to the order of Mr Cobb, and Mr Maynard, from the Assignees, to examine his room [in Newgate]; and Mr Hewitt, and Mr. Salkall, went with me. Upon examining an old trunk in his room, I found a bit of cloth, tied up with some white tape; I cut it, and felt something pretty thick; in it was a bit of silk tied up; I opened that, and there I found five half bank notes. I seeing some old print upon one of them, I looked at it, and said, I am sure this is not for less than a thousand pounds…”

Perrott was sentenced to death upon this evidence and more and was duly hanged.

James Bullock was an early nineteenth century wine and spirit merchant. The problem for Mr Bullock’s creditors was that he fled from his place of abode, “to injure his just creditors.” He also failed to deliver up to his Commissioners in Bankruptcy his goods and effects. He was however allowed, “his necessary wearing apparel and his wife’s and children.” Bullock made a strong defence, as one might expect for a man arguing for his life. Addressing his fellow traders on the jury Bullock observed that the bankruptcy statute under which he was being tried was “severe.” This tension, between the men of the jury, who themselves might one day face the severity of the bankruptcy laws, and the need to ensure full disclosure of assets, must have weighted heavily on the minds of those judging Bullock.

In 1824 the death penalty was reduced to transportation for life or imprisonment and hard labour for a term not exceeding seven years. Often a defendant who was found guilty of a capital offence had his sentence commuted to transportation. To combat this species of bankruptcy fraud the death penalty was seen by the enlightened minds of the early 19th century as being too severe. For a full exposition see here.