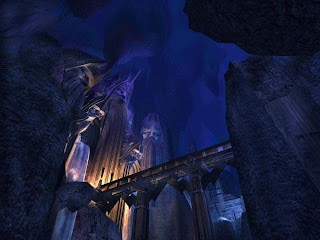 Mr Justice Arnold has handed down his judgment in Moria & Anor v Bednash [2011] EWHC 839 (Ch) (08 April 2011). The case does not relate to the home of the Dwarf clan of the Longbeards, namely, Professor JRR Tolkien's Moria, (Sindarin for "Black Chasm" - pictured), instead, the case concerns an agreement made by an Insolvency Practitioner (IP), Lane Bednash of Valentine & Co. Mr Bednash whilst acting as a liquidator agreed to assign certain alleged causes of action to Mr Moria and Mr Gill. Mr Bednash contended that no binding agreements were concluded.
Unfortunately the case does not read well for IPs or solicitors in relation to witness evidence. The judge noted in relation to Ms Kaur (solicitor for the claimants) and Mr Bednash, "I regret to say that neither Ms Kaur nor Mr Bednash impressed me as witnesses. Ms Kaur gave evidence in a combative manner which suggested that she approached the task more as an advocate than as an objective witness of fact. Mr Bednash's oral evidence was that he had no recollection at all of his telephone conversation with Ms Kaur on 17 August 2009 despite expressly stating in his second witness statement that he did recall it."
After an exhaustive exposition of the facts and arguments (based on contract law cases) Arnold, J concludes that Mr Bednash did not enter into a binding agreement. There is little insolvency law in the case, it is however interesting as an example of liquidator conduct. It has also given me an excuse to cite Professor Tolkien!
Picture Credit: http://pcmedia.gamespy.com/pc/image/article/887/887238/the-lord-of-the-rings-online-mines-of-moria-20080708043338499_640w.jpg