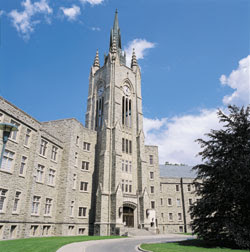 It is all go on the bankruptcy history front! In addition to Professor Kaden's talk which I mentioned yesterday, news reaches me via the Legal History Blog that Professor Thomas Telfer's (University of Western Ontario, Western Law - pictured) new paper "Ideas, Interests, Institutions and the History of Canadian Bankruptcy Law 1867-1880" is also now available on SSRN. Here is the abstract:

"Professor Michael Trebilcock’s scholarship has long recognized the importance of ideas, interests and institutions in shaping policy. Michael Trebilcock and Ninette Kelley make economic interests, contested ideas, and institutions the focus of The Making of the Mosaic: A History of Canadian Immigration Policy. Taking the same analytical approach that Michael Trebilcock and Ninette Kelley use in their ground-breaking book on the history of Canadian immigration, the paper examines the Canadian historical experience to gain an understanding of the ideas, interests, and institutions that have been influential in shaping the evolution of Canadian bankruptcy law. The paper addresses the rise of Canadian bankruptcy legislation in the early post Confederation period and its ultimate repeal in 1880. Bankruptcy law represented both a conflict of ideas over the morality of the bankruptcy discharge and a distinct divergence of interests between local and distant creditors over the advantages and disadvantages of a pro rata distribution. Institutional factors such as federalism, courts, and the emerging regulatory state also had an independent effect."

Reviewing the paper Professor Dan Ernst has noted: "I read an earlier draft of this paper and recommend it highly. Telfer provides an excellent case study in the law and politics of institutional choice. His research in the manuscript records of county courts, boards of trade, the Department of Justice, newspapers, and other sources, gives readers a vivid sense of who won and who lost in the choice of common-law and statutory regimes for governing a vital field of economic public policy."
Picture Credit: http://nusalumgroupb.files.wordpress.com/2009/04/western-ontario.jpg