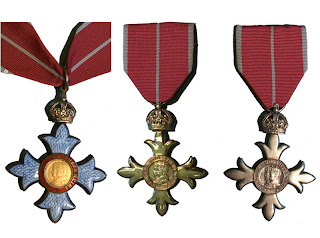 The world of insolvency is no stranger to honours. In recent years we have seen the award of Queen's Counsel (honoris causa) for an insolvency professor and an eminent circuit judge; the conferment of an Officer of the Order of the British Empire (OBE) medal for an Insolvency Service employee; and the conferment of a Member of the Order of the British Empire (MBE) medal for charitable activity in the field of insolvency.
Over the last thirty years or so we have also seen knighthoods for those connected with insolvency (e.g. Sir Kenneth Cork, Sir Roger Cork and Professor Sir Roy Goode QC), in addition of course to the many customary knighthoods for judges in the Chancery Division. Mr Robin Knowles CBE QC, of 3-4 South Square was appointed a Commander of the Order of the British Empire (CBE) for his pro bono legal work. Ms Shirley Jackson MBE, the long serving insolvency practitioner at BN Jackson Norton, was awarded an MBE for services to the insolvency industry in the 2006 Queen's Birthday Honours list. In 1999 Mr Stephen Adamson CBE was appointed CBE for services to the insolvency industry. In the academic sphere we have also seen the award of a Fellowship of the British Academy (FBA) for Professor Sarah Worthington.
The Government Adjudicator with responsibility for the Insolvency Service, Ms Judy Clements OBE, is a couple of rungs down the honours ladder than her predecessor, Dame Barbara Mills DBE QC.
Insolvency has also affected the honoured. Mr Jim Davidson OBE, the comedian, has gone through the bankruptcy process and quips that the acronym stands for "One Bankruptcy is Enough." Ms Tracey Edwards MBE, the yachtswoman, has also survived insolvency and now makes a living talking about her experiences. Ms Rachel Lowe MBE, the games entrepreneur, has also vowed to trade out of the insolvent position in which her company currently finds itself. Rachel, aged 31, received her MBE just after her games company, RTL Games, was placed into administration. Mr William Foxton OBE shot himself with a 9mm Browning pistol to avoid the stigma of bankruptcy after he was caught up in the Madoff affair.
The latest incumbent of the Lord Mayoralty of London is an insolvency man, however, based on this year's Queen's New Years honours list it looks as if he will not receive the customary knighthood.
The 2010 New Year's Honours List is no exception in terms of the steady flow of recognition for those in the insolvency field. Insolvency features again in the shape of Ms Gillian Thompson, former chief executive of the Accountant in Bankruptcy (AiB - "Scotland's Insolvency Service") who has been appointed an Officer of the Order of the British Empire. The citation reads: "Ms Gillian Jane THOMPSON Lately Chief Executive, Accountant in Bankruptcy, Scottish Executive."
The AiB press release notes:

"Gillian Thompson, the former Accountant in Bankruptcy and Agency Chief Executive, has been awarded an OBE (Officer of Order of the British Empire) in the Queen's New Year Honours List for 2010.
Gillian's well deserved honour is received alongside a number of high profile names in this years list including; Jenson Button, Patrick Stewart and Beth Tweddle, as well as others of outstanding merit, commended for lifelong achievement and exceptional performance within their fields.
Gillian spoke of her delight at discovering that she had been recognised by the Queen for her contributions to the nation:
"It was lovely to be included in the list and I am still getting used to seeing my name attached to an OBE!"
"However, whilst it is great to have my efforts recognised, I would not have been able to make the progress I did at AiB without the support and commitment of very many colleagues at AiB."
"The award recognises the great arises we made together it just happens to have my name on it. Thanks to all who made the journey with me, past and present."
The OBE comes in recognition of her service and achievements as The Accountant and AiB Chief Executive (2002 until October 2009), where she was responsible for;

Not withstanding her many achievements within AiB, Gillian's career touched significantly on other important areas of public service including: leading on the modernising of laws governing divorce, civil partnerships and the rights of grandparents and absent fathers, as Head of Civil Law Policy branch; the introduction and subsequent abolition of tuition fees and the introduction of the graduate endowment; playing a key role in introducing equal opportunity employment in NHS health care; improved education services in Scottish prisons; and, the transition from the community charge (poll tax) to council tax in the early nineties.

Although taking early retirement in October 2009, Gillian's contributions to both AiB and to the government will continue to impact in the years to come. A view held by the incumbent Accountant and Agency Chief Executive, Rosemary Winter-Scott:

"Gillian has left a lasting impression on the Agency. One that I feel is testament to her hard work and huge achievements in her time as Chief Executive. It will be a hard act to follow!"

"On behalf the Agency, I would like to say congratulations on a well deserved tribute"